The Brisbane Broncos have added five more players to their NRL Women's Premiership squad for the 2019 season.

The side has added the exciting talents Tarryn Aiken and Amber Hall, who will get their first taste of NRLW.

Aiken young half from Tweed Heads and is also a former Australian Touch Football representative while Hall, who has played for New Zealand, can play both front and back row.

For Ward, re-signing with the club after a successful first season capped off a huge week which saw her fight her way back to fitness in the wake of surgery to repair a ruptured and slipped disc in her back at the end of last year.

“I’m stoked and really excited – there’s no other club I’d rather play for and really grateful that I got this opportunity,” she said.

“It was a challenging injury for me but I think anyone who plays contact sport faces injuries through their careers so that was just my challenge … I’ve bounced back and played five or six games now and had no issues.

“So I’m just ready to get back out there and put on the Broncos colours and play footy again."

The Broncos have already seen captain and halfback Ali Brigginshaw, fullback Chelsea Baker, and props Heather Ballinger and Steph Hancock had all re-committed to the club. 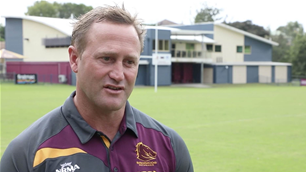