The W-League is scheduled to kickoff in December and teams are starting to take shape but the competition was still being talked about in terms the players it lost until Brisbane Roar began to change that when they announced the arrivals of attacker Emily Gielnik and midfield star Tameka Yallop.

The last season Emily Gielnik graced the W-League she was instrumental in a first place finish for Melbourne Victory, attracted the attention of Bayern Munich and scored one of the best Matildas goals of the year.

Gielnik and the returning Yallop will join ex Matilda Kim Carroll in what could be one of the strongest rosters in a league where it is anticipated that many other sides are relying on youth.

If Katrina Gorry and Clare Polkinghorne return as they routinely do each season The Roar Corp could find themselves cheering on the squad with the most Australian Internationals in the W-League and a team least effected by the exodus of players to Europe.

Hayley Raso is unlikely to return after becoming an instant favourite at Everton but Emily Gielnik is an excellent replacement. She is a deadly, direct, attacker who is capable on either flank and dangerous in the penalty box as her form Vittsjö GIK has shown.

She notched up three goals and and assist in a dominant league performance,  beginning proceedings with a classy cushioned volley over the keeper and hitting a spectacular long range solo strike for her third. Gielnik, Yallop and Carroll will be joined by ex Perth prodigy Leticia Mckenna who will no doubt benefit from sharing the field with her experienced new team mates.

It is too early to predict the outcome of the league, and other clubs have recruited proactively and creatively but Brisbane Roar have positioned themselves to be a team to watch for both fans of the national team and fans of the club. 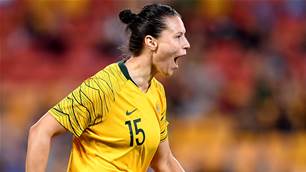 Matildas' Gielnik to leave Roar too