Matildas captain Kerr was played in on 58 minutes and expertly nutmegged North Carolina Courage defender Abby Erceg on the edge of the box before slotting the ball through the legs of goalkeeper Stephanie Labbe to give Chicago a 2-1 win.

The Golden Boot winner in the NSWL and in the W-League in each of their past two campaigns, 25-year-old Kerr scored her 10th goal in just 10 games during this American season to end a two-game stretch in which she failed to find the net.

The visitors took the lead through Lynn Williams on the half-hour mark before Vanessa DiBernardo drew the Red Stars level seven minutes later.

Sam Kerr with the lovely nutmeg and easy finish to the back of the net! pic.twitter.com/fAhZDTcoH5

Kerr's strike gave Chicago their third win in their past four games and lifted them to third on the NSWL ladder with 20 points from 13 games, just three points adrift of leaders Portland Thorns FC and two behind North Carolina.

Kerr is the NWSL's all-time leading scorer and the only player to surpass 50 career goals in the American league while she set a new league benchmark for goals in a campaign by scoring 17 in 2017. 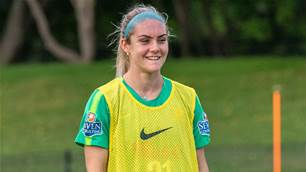