Leah Blayney heaped praise on 'team-oriented' Mary Fowler after the Aussie prodigy's brace guided Australia's 3-1 defeat of Thailand in the AFC U/19 Championship.

Fowler stole the show with two electric first half goals, the first a cool side foot from an acute angle with extreme venom, the second a typical-Ronaldo strike.

One touch, out of the feet, burned into the corner of the net from outside the box.

It was a performance that left nobody in the crowd wondering whether she was a level above this competition.

But luckily for Blayney and the Matildas set-up, the Young Matildas coach insists she plays for the team and team alone.

“Mary Fowler’s finishes were excellent on the back of a good build-up," Blayney told afc.com

"As you saw in the celebration she is very much team-orientated and the girls celebrated the goals as a team which was fantastic.”

The overall performance was much-improved on the 5-1 demolition the Young Tillies copped from North Korea a few days prior, giving Blayney confidence that the team will continue improving.

“I am very pleased with the team’s performance,” Blayney continued.

“We were very good at progressing forward and the quality of our possession in terms of creating goalscoring opportunities was definitely an improvement. 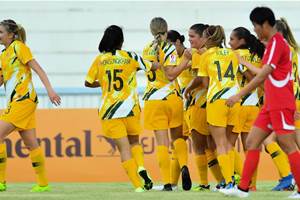