Ash Barty is just one step away from gaining the world No.1 ranking after reaching the Nature Valley Classic final.

The world No.2 defeated Czech Barbora Strycova 6-4 6-4 in the semi-final on Saturday.

Barty broke early in the first set after Strycova double fault despite facing break point a game earlier and not long after she served her way out from being 15-40 down to consolidate the break.

The 23-year-old did face some tough play from the Czech in the second set as there was no difference between the two with it level at 4-4. However, Strycova poked a backhand volley wide which saw Barty take the lead and serve for the match.

The French Open champion hasn't dropped a set all week in Birmingham and also extended her winning streak to 11 matches.

"You have to enjoy it and come out here and take it with both hands," Barty said during an interview on court.

"Obviously we're having a good time at the moment so hopefully we continue that tomorrow."

At the moment, she sits just two points behind current world No.1 Naomi Osaka with a win tomorrow in the final securing her that top spot.

Barty would become the first Australian since her hero Evonne Goolagong-Cawley to reach the summit of women's tennis.

This will be Barty's second Nature Valley Classic final but will be looking for a different outcome than the one in 2017 after going down in a three-set thriller to Petra Kvitová.

Barty now faces doubles partner Julia Görges in the final with the pair retiring from their semi-finals match against Anna-Lena Grönefeld and Demi Schuurs. 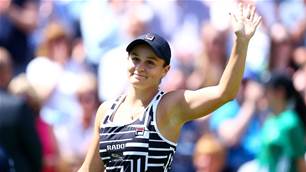 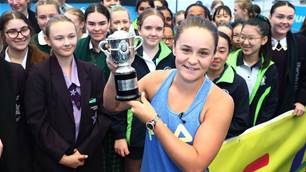 Barty welcomed back to Brisbane 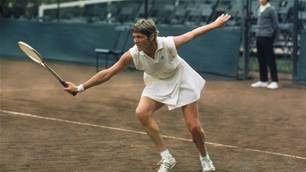