Ashleigh Barty has given Australia the lead in the Fed Cup World Group semi-final against Belarus.

The world No.9 took the reserve rubber 6-2 6-2 against Aryna Sabalenka in just one hour 19 minutes.

The win gives Australia a 2-1 lead heading into the second reserve singles match between Sam Stosur and Victoria Azarenka.

“I really had to try to get into her service game, previously she’s really blown me off the court,” Barty said.

“I think it’s a little bit different playing at home, Sam was able to expose some areas yesterday that I hadn’t seen before so it was a team effort.

“I’m here to play for myself and my country, we’ve had a good run in Fed Cup recently, let's hope we can continue that.”

Barty's niece, Lucy, also agreed it was a good match of tennis when she joined her aunt at the press conference. The three-year-old also joined Barty on court ahead of the game and tried to take over for Alicia Molik as captain.

The 22-year-old played phenomenal tennis on Pat Rafter despite the fight Sabalenka put up in each set.

The opening games of each set were a real arm wrestle and it wasn't until Barty took the break that momentum swung her way.

Sabalenka tried to hold onto her service points where possible including coming from two break points down during a game in the first set to keep it level.

However, her almost three-hour match against Stosur yesterday was taking a toll on her both physically and mentally.

As Barty gained the upper hand after both her breaks, she forced Sabalenka to go for winners.

The 20-year-old Belarusian wasn't really putting a foot wrong, she was playing well but Barty was making her travel across the court before playing drop shots or forearm winners.

What was vital for Barty was her service game. She finished with 12 aces and won 74 per cent of her first serve points.

If Stosur isn't able to win against two-time Australian Open and former world No.1 Azarkena, it will come down to the doubles tie.

Barty, who is ranked No.5 in doubles, is ready to be called upon if needed.

“Hopefully we don’t need it but if we do I’ll be ready to go,” she said. 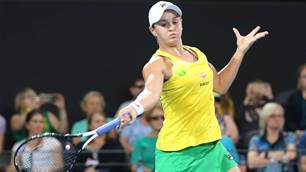 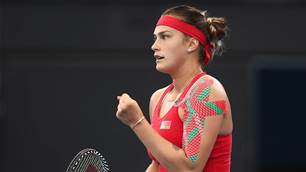