Ash Barty is through to the third round of Wimbledon after a straight sets victory over Alison Van Uytvanck.

“I think overall today I was just really clear. I think I did a really good job with my execution of how we wanted to play,” Barty said.

“It was pretty sharp right from the start. I was able to implement what I wanted to right away and put the pressure straight back on her.”

Racing into the third round, world No.1 @ashbar96 extends her match-winning run to 14 as she wastes no time in beating Alison Van Uytvanck#Wimbledon pic.twitter.com/bAT7OYuLJm

It's the second consecutive season the 23-year-old has made the third of Wimbledon but she will be looking to make the second week of the Grand Slam for the first time.

Barty took a 5-0 lead after just 18 minutes against the Belgian but Van Uytvanck was able to take a set on her serve before the top seed closed out the first set.

The second quickly went from 2-1 to 5-1 as Barty's versatility rattled Van Uytvanck.

Barty continued her march onto winning the match but there was a slight hiccup at 5-2 when she was serving for the match.

At 30-0, Van Uytvanck nabbed four points in a row to break back. However, as match point arrived on the next game, Barty was able to convert and seal the win.

Barty will face Brit Harriet Dart on Saturday with the time yet to be decided. 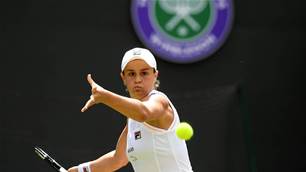