Victoria Azarenka and Ash Barty are through to the final of the Internazionali BNL d’Italia after taking down the top seeds.

To reach the semifinals, the pair faced a mammoth Open after a historic ‘total washout’ on Wednesday meant that players had to do double duty. Azarenka and Barty had to play two doubles matches on Friday.

The pair had claimed a win over the World No.1 doubles team at the Miami Open on their way to the semifinals in March.

In this match, both teams started by swapping breaks twice in a tight opening affair and staying on serve. However, with Barty on the baseline and Azarenka at the net, they were able to seal the first set.

The second set was much the same before Azarenka served for the match at 5-3, however, a double fault on match point gave the Czech duo a lifeline.

But Barty and Azarenka redeemed themselves in the following game.

“The key today was to just be aggressive, take your opportunities,” Azarenka told WTA.

“Obviously we had to create some shots, create the momentum, and take our chances. We were really aggressive and making good volleys, just making a lot of things happen on the court.”

They will now face No.8 seeds Anna-Lena Groenefeld and Demi Schuurs at 11pm AEST. 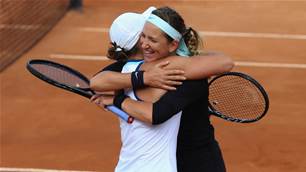 Digger out to do a Ben Curtis at Sandwich