While many of her national teammates have since made the move to clubs in England, France and Spain, the 22-year-old was ahead of the curve in many regards when she joined Atletico Madrid in 2018.

Injuries limited her playing opportunities across 2020 and with COVID-19 affecting the Spanish league, Chidiac and the club agreed to terminate her contract in December and she returned to City.

With her career having stalled in the past 12 months, Chidiac said it made sense to return to Australia as she regains her fitness and form.

She says her time in Spain forced her to grow up both as a person and a footballer but also gave her a greater appreciation of what is on offer to players in Australia.

"There were times that you'd think that things would be a lot better and the standard would be better and that's why now, looking back at the W-League and what we have especially with the support of the PFA, we're very, very fortunate here," Chidiac siad.

"I think that Australia's ahead of the game.

"That's another reason why I'm back now because I just needed that support."

Having completed quarantine, Chidiac was given a tough reintroduction to the W-League last weekend when she came off the bench in the second half of City's heavy 6-0 defeat to Melbourne Victory.

That scoreline - and the 30 degree heat - hurt but after the disappointing end to her Spanish adventure, it was the start of what Chidiac hopes is a road back to a future overseas opportunity.

"I love playing overseas. I love the experiences. It's not just football," she said.

"I'm very fortunate to have friends from all different countries from that and that's something I do love about the game and the community sense about it.

"I'll definitely want to be heading back. I don't know which country it will be, once again just trying to see how this immediate season goes." 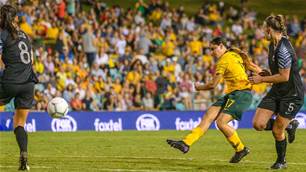