Australian referees Kate Jacewicz and Casey Reibelt have been selected as officials at the FIFA Women's World Cup next year.

The journey to the World Cup began in September 2015, when FIFA officially started its Road to France 2019 women's refereeing project.

Both referees were pre-selected as prospective referees for France in June 2016.

Earlier this year, Jacewicz was selected as one of 15 referees to officiate at the U-20 Women’s World Cup.

Jacewicz is not new to the international stage having officiated at her first World Cup at the FIFA U17 Women's World Cup where she became the first Australian since Tammy Ogston (2007) to be the main referee at a FIFA final.

Reibelt is the 2013/14 W-League Referee of the Year and internationally at the 2014 Algarve Cup.

The Queenslander was also selected as an official for the 2016 FIFA U20 Women’s World Cup.

Preparation is set to continue with a number of preparatory seminars, while the FIFA referee instructors will carry out observation work and provide ongoing support and guidance. 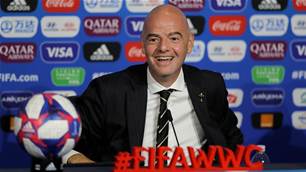