For those unfamiliar with the sport of Snowboard Cross, the event consists of multiple competitors who race down a snow-covered obstacle course on snowboards.  The Youth Winter Olympics format has four competitors in each race.

Competitors qualified for the Youth Olympics semi-final through their performance in five preliminary round-robin heats.

Each race performance is evaluated and awarded a certain amount of points, ensuring the best and most consistent snowboarders progress.

HISTORY MADE! Snowboarder Josie Baff has made history as Australia’s first ever Winter @youtholympics Champion at @Lausanne2020 🥇

Baff won all but one of those heats and tied in second-highest points tally in the preliminary round. With this score she progressed to one of two semi-finals and then progressed to the competition’s Big Final by winning her semi-final heat.

The 16-year-old teenager from Jindabyne, NSW then won the event’s Big Final, where medals are at play, by narrowly beating France’s Margaux Herpin by 0.05 seconds. Switzerland’s Anouk Doerig finished third.

ACT native Amber Essex also competed in the competition but narrowly missed out on the semi-finals by finishing 10th, just one point short in the preliminaries.

Both athletes will compete again in the Team Ski-Snowboard Cross event. 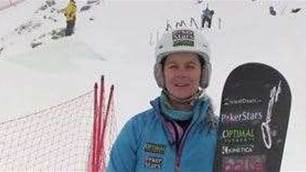