FFA have launched a bid to host another set of U/20 Asian Cup qualification matches, this time in the regional Victorian town of Shepparton.

The Shepparton bid coincides with FFA's other bid to host qualification matches for the U/17 Asian Cup in the NSW Hunter region's Cessnock.

Both bids are for round one of qualification, meaning if successful, Australia could host its own qualification stages for the first round of both the Junior Matildas' U/17 Asian Cup and the Young Matildas' U/20 Asian Cup campaign.

The U/20 qualifiers will be staged in March next year and would bring three to four additional Asian teams to Shepparton.

FFA CEO James Johnson said the bids paralleled nicely with hosting the 2023 World Cup and provided the best opportunities for the next generation of Matildas to play at the best tournaments available.

“We are excited to have partnered with Greater Shepparton City Council to submit another bid to host AFC youth women’s football content in Australia next year,” Johnson said.

“This bid – alongside our submission with Cessnock City Council announced in August – aligns with our vision to host more national team matches on home soil, particularly in the lead up to our hosting of the FIFA Women’s World Cup in 2023.

“Like our bid with Cessnock, this submission with Greater Shepparton City Council has taken place in the hope and expectation that the COVID-19 situation in Australia will have improved significantly by 2021. Should we win hosting rights we will work closely with AFC and representatives from all levels of Government to deliver the tournament if it is safe to do so.

He also reiterated the importance of staging these matches in regional areas, where the public can see the next generation of football stars in action.

“We recognise and acknowledge Greater Shepparton for their foresight to work with us on this bid, which may result in some of the potential stars of 2023 featuring in regional Victoria just two years prior to the FIFA Women’s World Cup on our shores," he continued.

"The tournament will be a wonderful opportunity for our future stars to showcase their talent in front of friends and family. Football is a global game and we want to create more opportunities for our communities, particularly in regional Australia, to see international matches and connect with the game." 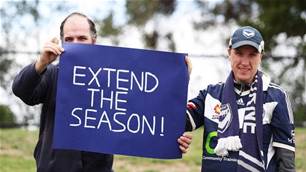