After a successful, albeit nail-biting, Women’s Asian Cup and a ticket to the 2019 FIFA Women’s World Cup, most of the Australians are back in the States with their NWSL teams.

The league just finished its fifth week and for some teams, the Aussies’ return couldn’t come soon enough.

Opening up the weekend with a nationally televised match, North Carolina Courage faced Kyah Simon and the Houston Dash.

Exactly one week after landing in Houston, Simon made her debut in the starting Xl. Dash head coach Vera Pauw started Simon in center midfield, but as the match wore on, we saw Simon move into the No. 10 position, most likely to give the team an offensive boost they were lacking.

Quiet most of the match, Simon took a nice shot on goal in the 85th minute, barely missing the crossbar. The 26-year old was in the mix during set pieces and played a full 90, but it’s clear she needs more time with the team to find her groove.

At the end, it was first-place North Carolina over the Dash, 2-0.

After a few seasons away from the league and a season in Japan, Katrina Gorry returned to the NWSL with the Utah Royals against Portland Thorns FC.

In Utah, Gorry is reunited with many of her former FC Kansas City teammates, so it didn’t take her long to feel comfortable. Coming in off the bench in the 60th minute, the mighty “Mini” fit seamlessly into the front line beside fellow W-League forward Katie Stengel.

Gorry played from back to front, using her wheels to press the front-line forward. Portland created more chances, but Utah’s defence held tough in the 1-1 draw.

The 2017 NWSL MVP and league’s all-time leading goalscorer, Sam Kerr started for the Chicago Red Stars as they travelled to play Washington Spirit.

Kerr often had three to four Spirit defenders breathing down her neck. Kerr never looked pressured, but it did keep the Aussie star off the scoreboard.

In 90+ minutes, the referee stopped play to admonish Kerr, but she gave it right back to him – urging him to hurry up and book her so the game could continue.

Finally, after wasting precious time, Kerr was shown the yellow for misconduct and quickly went back to play but it was too late for Chicago, who left Washington with a 1-1 draw.

There were more than a few Aussies representing when Seattle Reign FC played at Orlando Pride.

Seattle’s new defender Steph Catley started her first game in a Seattle kit after two seasons with the Pride.

In the first half, Catley and company controlled the majority of possession. The remainder of the match saw Catley very intricate in keeping Seattle off the scoreboard in a very competitive match.

On the other side of the pitch for Orlando, it was the highly awaited return of Alanna Kennedy and she did not disappoint.

Kennedy saw her share of action throughout, getting involved early in the match with a shot on goal that was denied by a kick save from Seattle goalkeeper Michelle Betos.

Later, Kennedy delivered a nifty back-heel pass to Ali Krieger that resulted in an offensive build up. Then in the 61st minute, the lanky Aussie stood over the ball in a free-kick situation, but it was Brazilian legend Marta who eventually took the shot and scored Orlando’s lone goal.

Pride debutant Emily van Egmond made her debut as a substitute in the 46th minute and immediately changed the tempo of the game playing her style of high-possession football.

“She’s a player who likes to possess the ball and a very good technician,” said Kennedy after the match.

“I think she’ll fit well in the team with the personnel that we have and I’m very excited to have her here.”

The three Aussies on Portland Thorns FC did not see action on April 28. Caitlin Foord is recovering from foot surgery; Hayley Raso has a strained left knee, and Ellie Carpenter was listed as a substitute in the Portland vs. Utah match but didn't play. 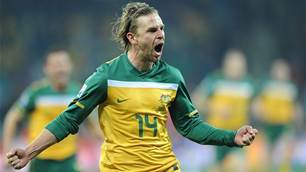 The Mixer: Golden-Gen Socceroo targets youth, it's Matildas time – and gone in 21 days