The 2018 NWSL season has wrapped up with the Championship Finals played between North Carolina Courage and Portland Thorns.

Portland started forward Caitlin Foord up top with the youngster Ellie Carpenter in the right back position. However, Portland was never able to find an answer to NC’s powerhouse offence and stingy defence from beginning to end.

Down by three goals in the 81st minute, Foord took a hard shot on goal that sailed high and wide. Carpenter also got off a few promising crosses late in the match, but it was too late as NC walked away with the win and the NWSL Championship trophy with a 3-0 victory over Portland. Carpenter limped off the pitch late in the game in visible pain.

Portland favourite Hayley Raso, who was sidelined with a broken back, was on hand as a spectator and took part in the post-game medal ceremony.

While NC has no Australians on their squad, it was a successful season for many Australians in the NWSL. Chicago Red Stars forward Sam Kerr set the league on fire, winning the Golden Boot award for the second straight season. Kerr finished the regular season with 16 goals and four assists in 19 games. She was also named to the league’s 2018 Best Xl.

Lydia Williams was a dominant presence in goal for the Seattle Reign, ending the season with 10 clean sheets in 17 games and named to the 2018 Second Xl. Seattle defender Steph Catley was also named to the Second Xl team, with three assists and 17 starts in 17 games.

Watch the inspirational video on Lydia Williams by NWSL:

"The beauty of the little things in life has helped me where I am. I'm just happy to be here, I'm happy to play this game, and I'm lucky to."@lifetimetv x @lydsaussie pic.twitter.com/xTU2jyEuOw 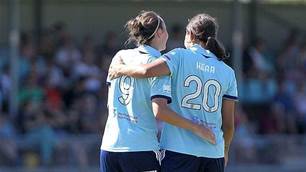