For the second year in a row, Kerr led the league in goals scored, finishing the regular season with 16 goals and four assists in 19 games. Kerr is the first player in NWSL history to win the award twice. The historic honour follows the July 7 match against Sky Blue when Kerr also became the first to score a hat trick in Chicago Red Stars history.

Chicago faced Sky Blue again earlier in the week to claim the fourth and final spot in the NWSL playoffs. Kerr, who was left off of FIFA’s Best Of short list, made a statement leading her team to a decisive 5-0 win.

In the 64th minute, Kerr found the ball at the near post, heading in a powerful shot for her 15th goal of the season. Later in the 80th minute, Kerr in front of goal selflessly passed the ball (with her chest no less!) to Rosie White for the goal.

Kerr finished the game with one goal, eight shots on goal, one assist, and three instrumental passes.

In their second match of the week, Chicago traveled to Utah Royals for the last game of the season. Kerr once again scored with her head for her 16th goal of the season. This time it came off of a soft touch that quietly lofted over the goal keeper’s head.

Despite the early lead, Chicago fell to Utah, 1-2. For the second game in a row, Utah defender Katrina Gorry was listed as a sub, but never entered the game.

In front of a record-breaking attendance of 21,144, Portland Thorns hosted their bitter rivals Seattle Reign to claim the No. 2 spot on the ladder and home field in the playoffs.

In her second start of the season, Portland forward Caitlin Foord lead the offence with Ellie Carpenter in the right back position. Down 1-0 early, Portland supporters broke into a Hayley Raso chant to help inspire their team. The team responded by scoring three unanswered points, coming away with the 3-1 victory. Raso is out with a back injury and will miss the playoffs.

Seattle goalkeeper Lydia Williams had her usual game with plenty of big saves. One, coming off what could have been an own goal by defender Steph Catley, which Williams was able to stop before it crossed the goal line. Williams finishes the regular season with 10 clean sheets and is a favorite to win NWSL Goalkeeper of the Year.

With the win, Portland will join North Carolina as hosts of the playoffs. The NWSL Championship Final will be held at Providence Park in Portland on September 22, 2018.

How revered is Hayley Raso in Portland? Check this out:

She may be on the other coast, but @HayleyRaso is here too. 🌹 #PORvSEA #BAONPDX pic.twitter.com/96PjZtASZj

Orlando Pride traveled to New Jersey to play the winless Sky Blue FC. Orlando’s Alanna Kennedy started out strong in the midfield, pushing forward on offence and cleaning up on defence. However, typical of Orlando’s season, they dominated for most of the game with spurts of looking in complete disarray.

Sky Blue scored in the 78th minute to earn their first win of the season. Orlando midfielder Emily van Egmond, whose minutes have been pared down over the past few games, subbed in at the 83rd minute. Final score: Sky Blue 1, Orlando 0.

Will Kennedy be back in Orlando next season? We’ll see…

North Carolina Courage closed out their record-breaking season with a dominating win over Houston Dash 5-0. Houston forward Kyah Simon subbed in at the 87th minute into the attacking midfield position.

Simon tried to affect the score line with good passes in the run of play however, it was too late as Houston fell hard to league-leaders. Houston midfielder Clare Polkinghorne is out with a left ankle sprain. This was Simon’s third season in the NWSL and Polkinghorne’s first. 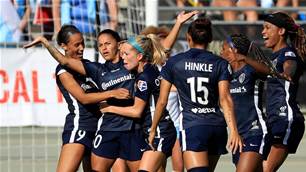 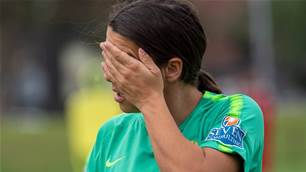