The National Women’s Soccer League (NWSL) kicks off their sixth season on March 24, 2018.

Most games will be available for viewing for international audiences at NWSLSoccer.com.

To keep you up to date on your favourite Aussies playing in America, here is the full list and their 2018 NWSL teams:

Sam Kerr, FW – The 2017 NWSL MVP and All-Time Leading Goal Scorer is back and on a mission to bring a much-deserved championship to Chicago.

In what was undeniably the biggest blockbuster trade of the offseason, Sam Kerr and all her trophies were traded from Sky Blue FC to Chicago (sending Christen Press to Houston, Carli Lloyd to Sky Blue). 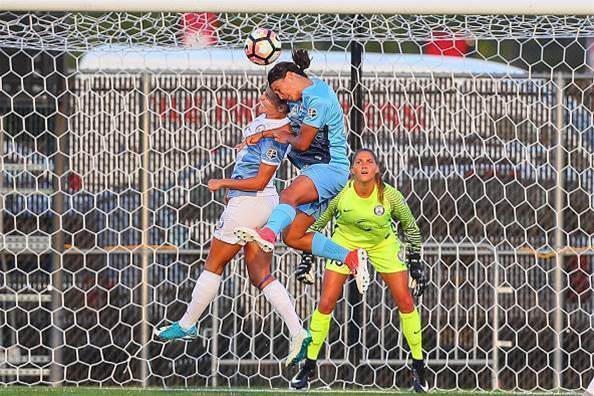 After last season’s loss in the NWSL Semifinals to North Carolina, the Red Stars looked completely distraught and deflated. How could they possibly recover from yet another devastating defeat?

The positive energy and enthusiasm of Sam Kerr could be the answer. This trade has Chicago fans saying, “Christen Press who?” No slight to Press, but she tends to carry the weight of the world on her shoulders and everyone can feel it.

Kerr is the complete opposite and as long as she’s having fun, the whole world is backflips and bicycle kicks.

Kyah Simon, FW – Selected sixth overall by the Houston Dash in the NWSL dispersal draft (held after the Boston Breakers ceased operations), Kyah Simon will join one of the most diverse teams in the league.

Houston’s new Head Coach Vera Pauw’s team features players from seven different countries, but one thing the team lacks is a star player. This could be where Kyah Simon comes in. Houston will have to wait though, as Simon will start the season in Australia rehabbing a hamstring injury she sustained during the Grand Final. The club will provide updates on Simon’s status periodically until she joins the team.

Alanna Kennedy, D – Remember the days when Orlando was stacked with Aussies? Those days are gone.

Alanna Kennedy is the last to survive the Australian exodus from Tom Sermanni’s side. But it’s no surprise because since coming to Orlando in 2017, Kennedy has been a staple in the midfield, leading the team to their first NWSL playoffs. Listed as a defender, Kennedy’s versatility fits in well with Sermanni’s fluid formations. Contributing significantly to the offence, Kennedy scored five goals last season, including Orlando’s only goal in the NWSL Semifinal.

Van Egmond has shown just how important she is to her team especially in the Newcastle Jets recent run to the semi-finals, just their second appearance in 10 seasons.

She joins Matildas teammate Alanna Kennedy at the club.

Prior to her move to Newcastle for the recent W-League season, van Egmond spent two seasons in Germany, playing for 1. FFC Frankfurt and WfL Wolfsburg. Most young players come by way of the NWSL College Draft, where ages average 22 to 23. Being the youngest on the pitch is nothing new to the talented defender, who debuted for Western Sydney Wanderers at 15 years old. However, the NWSL is a fast and physical league, which could be a challenge for the youngster.

Knowing Portland, if Carpenter can step up in a backline that features Megan Klingenberg and Emily Sonnett, she’ll easily become a starter and instant fan favourite.

Caitlin Foord, FW – After a brief spell at Vegalta Sendai in Japan’s Nadeshiko League, Cailtin Foord is back in the NWSL.

When Foord was in California last summer during the Tournament of Nations, she was quoted as saying, “If California gets an NWSL team, I’ll be back.” Despite the recent injury Foord sustained during the 2016/17 W-League Semifinals (she sat out of the 2018 Algarve Cup), fans were excited to see her in pre-season with the Thorns.

With the addition of Cailtin Foord, Portland is hoping to fill in some gaps from the loss of top goal scorers Nadia Nadim, Amandine Henry and Allie Long.

Hayley Raso, FW – There’s a love affair between the dedicated fan-base of the Portland Thorns and the kid from Brisbane.

With her gritty spirit and tenacious play, Raso won the hearts of Portland fans, who presented her with their 2017 Supporter’s Player of the Year Award. That’s something to brag about, especially since the team was stacked with U.S. Women’s National Team players such as Allie Long, Lindsay Horan and Tobin Health, not to mention world stars like Christine Sinclair and Henry.

How much do the fans love her? Last season during a rare game where Raso sat out due to injury, many supporters showed up wearing her signature hair ribbon. On game day at Providence Park, where the average attendance is 17,000+, the chant of “Oi-Oi-Oi-Raso-Raso-Raso” can be heard ringing throughout the Rose City. Steph Catley, D – One of the NWSL’s more popular players, Catley was recently traded along with Jasmyne Spencer from Orlando to Seattle for Carson Pickett, Christine Nairn and Haley Kopmeyer (all familiar names to the W-League).

Can they bring that championship spirit to the Pacific Northwest? The fans sure hope so!

Lydia Williams, GK – Out of all the Australians in the NWSL, Lydia Williams is the most mysterious. Why has The Matilda’s number one goalkeeper had such a hard time getting a starting gig in this league? With the exception of Western New York Flash in 2014, Williams has had to fight for playing time at every other NWSL side she’s been on, including Washington Spirit and Houston Dash.

Now, heading into Seattle, she has to compete again, this time against former NWSL Goalkeeper of the Year Michelle Betos.

Katrina Gorry, M – The last time Gorry was in the NWSL, she was hoisting the 2014 Championship trophy as a member of FC Kansas City.

Now, FCKC is long gone and Gorry has joined the newest team in the league, Utah Royals FC under the command of Head Coach Laura Harvey. “She has gone away and developed her game further, and now together we felt it was the right time for her to come back to the league,” says Harvey.

“Katrina has proven she can play anywhere in the world and I’m excited to get her back to the NWSL.”

Currently, there are no Australians playing for Washington Spirit, North Carolina Courage, or Sky Blue FC.