Liz Cambage's record-breaking performances provided one of the highlights not only of this week, but of the entire WNBA season to this point as the Opals star shot into true MVP contention with utterly dominant play. Elsewhere, Steph Talbot took advantage of some increased playing time to put together some solid performances for Phoenix.

Undoubtedly, the biggest news of the week came early in the piece, as Liz Cambage broke the WNBA all-time record for most points in a game with 53 in a 104-87 victory over Rebecca Allen and the New York Liberty. Shooting a highly efficient 17 of 22 from the field, Cambage did damage all over the court, rounding out the eye-popping performance with a three from the top of the arc in the final minute of the contest to finish 4 of 5 from deep.

The 53 points broke the record held by Riquna Williams, who scored 51 in 2013 for the Tulsa Shock, the predecessor to Cambage’s Dallas Wings. Cambage also tallied 10 rebounds and 5 blocks, whilst fellow Australian Cayla George finished scoreless in 7 minutes off the bench. Rebecca Allen played just two minutes for the Liberty, also finishing scoreless.

HISTORY was made! @ecambage dropped 53 POINTS (including 4 threes), 10 rebounds, and 5 blocks to become the record leader in most points in a single #WNBA game! #WatchMeWork pic.twitter.com/kYqdT1WBZF

Cambage followed up with a second consecutive dominant performance to become the first player in WNBA history to register consecutive 35-point games, finishing with 35 points and 17 rebounds to completely dominate the Washington Mystics in the paint and lead the Wings to a 90-81 victory, jumping the Mystics in the standings in the process.

Dallas played again the next day, their third game in four days as they travelled to Chicago to face the Sky. Perhaps it was the packed schedule taking its toll, but the Wings fell to an unexpected 114-99 loss against a Chicago side that came into the game sitting at 7-16. Cambage again led the way for the Wings, tallying 23 points including 11 of 12 from the charity stripe as well as 5 rebounds, 5 assists, and 3 blocks. George saw six minutes of action off the bench, but finished without a shot attempt to tally just a solitary rebound in the loss.

The Wings welcomed Connecticut to Dallas for their final game before All-Star break, and despite a 25-point, 10-rebound double-double from Cambage, the Wings fell to a second consecutive loss as Shekinna Stricklen equalled a WNBA record with 8 threes which led the Sun to a 92-75 victory as the Wings dropped back to 14-11. George was given slightly more playing time in this one, finishing with 5 points and 4 rebounds in her 14 minutes of action.

Having been dominated by Cambage earlier in the week, things only got worse for the Liberty as they travelled to Atlanta to face the in-form Dream. Rebecca Allen saw a vastly increased 15 minutes of playing time off the bench to finish with 6 points and 2 rebounds, but the Liberty fell 82-68 after allowing the Dream to open up a 20-point advantage heading into the final term. The loss dropped New York to 7-16, five wins out of the playoffs with 11 games to play.

The Liberty hosted the Mystics in their next contest, hoping to pick up a much-needed win, but it wasn’t to be as the New York side dropped to their third consecutive loss, falling 92-75 as a third quarter surge from Washington set up the 17-point victory. Allen managed 10 minutes of playing time, knocking down a pair of shots to finish with 4 points and 4 rebounds.

New York had the chance to not only grab a significant win but shake up the playoff race as they hosted Minnesota in their last game before the All-Star break, and certainly had their chances to secure victory in a thrilling contest. The Liberty actually tied the game at 80-80 in the final minute, and with 3.2 seconds to go trailed 85-82. Strangely though, coach Katie Smith didn’t call a timeout when the opportunity arose, and Bria Hartley’s prayer of a shot from well outside the arc fell short to see Minnesota escape with the win. Unfortunately, Allen’s playing time fell back to zero in this one after two decent performances, with the Australian registering a DNP in this one.

The Seattle Storm are flying at the moment, and with their first game of the week coming on the road at the struggling Chicago Sky, the 17th win in 23 games was fully expected, and the Storm duly delivered. Led by 30 points from MVP frontrunner Breanna Stewart, Seattle used the first half to build an advantage before easing to a 101-83 victory, with Aussie guard Sami Whitcomb adding 3 points in five minutes off the bench for the victorious Storm.

The Storm kept the good times rolling against Connecticut in their next game, edging ahead in each of the last three quarters before rounding out a 78-65 victory. However, Whitcomb saw only token playing time, knocking down a solitary three-point attempt in her single minute on court.

However, Seattle ran into an Atlanta side looking for its seventh consecutive victory, and that is exactly what the Dream picked up as they spoiled Seattle legend Sue Bird’s WNBA record 500th game with an 87-74 victory. Whitcomb saw 9 minutes of action in the loss, knocking down a three and tallying a rebound and an assist.

The Storm rebounded from that lost with a dominant victory over Indiana to head into All-Star break on a high after posting a 92-72 victory over the Fever, steadily increasing their lead throughout the contest. Whitcomb again played a reasonable cameo off the bench, seeing 9 minutes of playing time and again finishing with three points.

After an eight-game winning streak was snapped a couple of weeks ago, the Phoenix Mercury have been a bit hot and cold, losing three on the trot before recovering to win their last two games before this week. However, they couldn’t make it three in a row as they fell in a classic against the Las Vegas Aces, falling 85-82 in a game that came down to the final shot as Diana Taurasi was just unable to round out a brilliant 33-point effort with what would have been the game-tying three in the final seconds. Leilani Mitchell’s six points included a vital three down the stretch that kept Phoenix close, whilst Steph Talbot finished scoreless in her five minutes of action off the bench.

Leilani Mitchell was back in Australia for the birth of partner Mikaela Dombkins' first child for the Mercury’s game against Minnesota, but Steph Talbot came up in a massive way for Phoenix following Diana Taurasi’s questionable ejection in the second quarter.

On behalf of the entire Mercury family, congratulations to Lei and Mikaela on the birth of their son, Kash Maxwell!

Moms and baby are in Australia and doing well ❤️👶🏻🇦🇺 pic.twitter.com/l15KHgKyPF

Rallying from 15 points down in the final quarter, the versatile Australian knocked down a pair of free throws before stealing Maya Moore’s pass on the next play to race away for the basket and put the Mercury within a single point with a minute to play. Unfortunately, those would be the final points of the game for the Mercury as Minnesota scored the last four points of the contest to secure an 80-75 win. However, Talbot was exemplary to finish with 15 points, including a perfect 6 of 6 from the charity stripe and 4 of 5 from the field, in 20 minutes of playing time.

Mitchell remained away with the team in her parental capacity for the remainder of the week, adding to a growing list of outs for the Mercury’s game against Chicago as Diana Taurasi sat out due to a suspension stemming from an accrual of technical fouls. The Mercury matched the Sky in the early stages, but trailed 56-43 at halftime of a high-scoring affair. Things went from bad to worse for the Mercury early in the third quarter as Brittney Griner was ejected for a flagrant foul, and although DeWanna Bonner led a third-quarter charge, Phoenix were unable to hold Chicago in check down the stretch, falling to a 101-87 loss and drop to 15-11. Steph Talbot secured a rare start and played 37 minutes, tallying 9 points, 3 rebounds, and 3 assists. 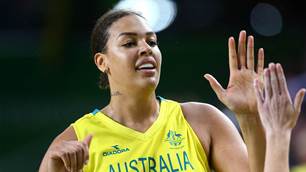 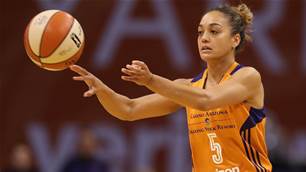