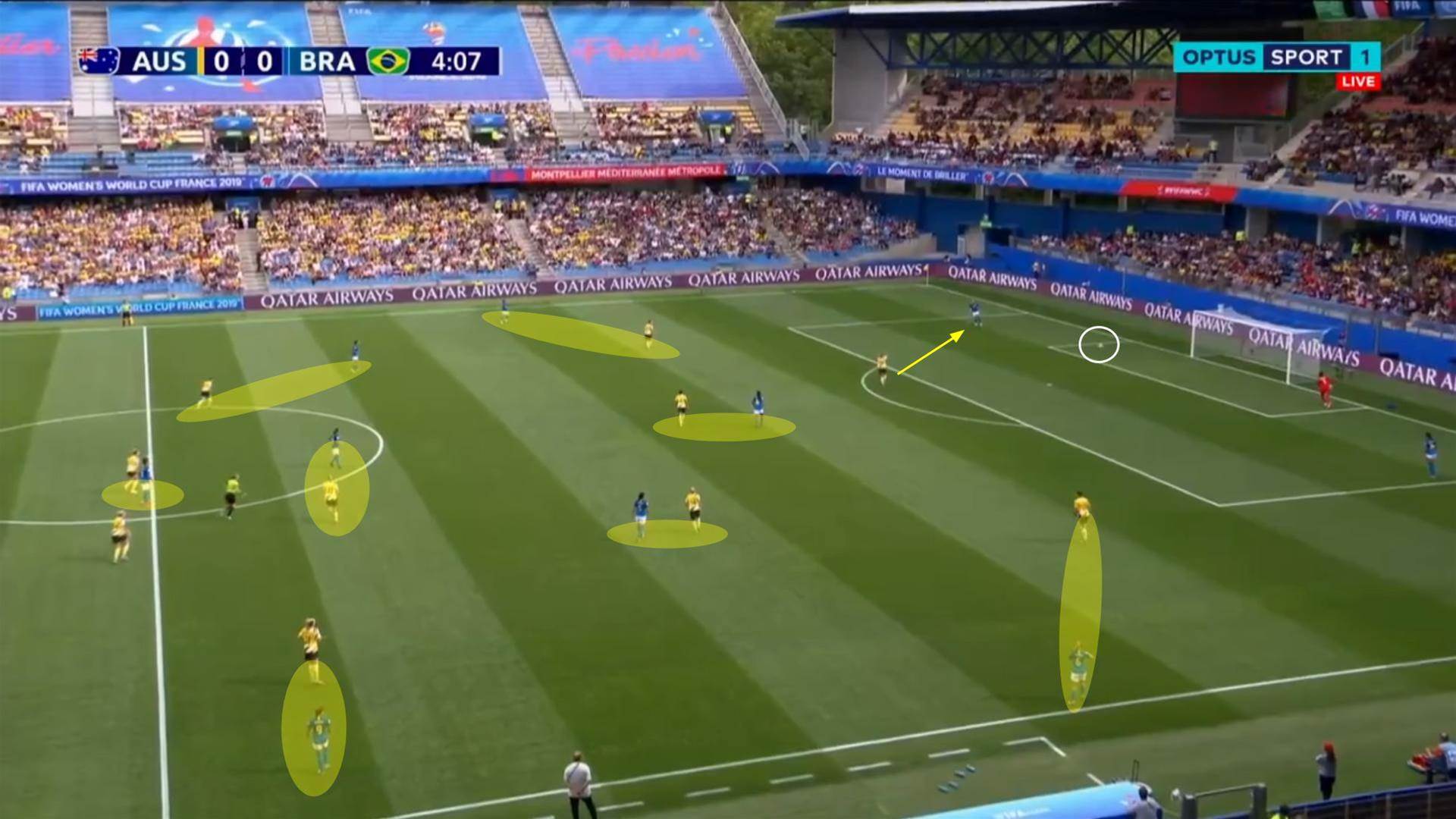 Under Ante Milicic, the Matildas pressed very high up the field, particularly during the early parts of games. This picture from the World Cup game against Brazil shows a perfect example of this.

Brazil are playing out from the back (ball circled in white), with centre forward Sam Kerr attempting to press and split the centrebacks (yellow arrow). Behind Kerr, there are eight 1v1 match-ups (highlighted).

For pressing to be successful, it needs to be coordinated. Developing this coordination takes time, and as the tournament progressed, the Matildas became better at winning the ball back. This table shows how each game at the World Cup was marked by a steady increase in the pressing success rate. 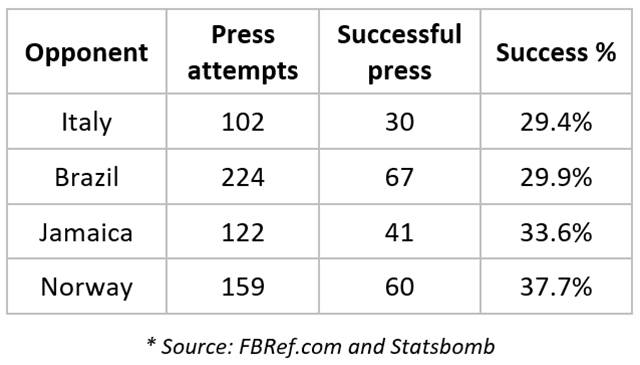 A successful press also needs players to move together, in order to avoid spaces appearing between the defensive lines. When the Matildas forwards and midfielders pressed high up the field, this meant that the defenders had to follow, resulting in a high defensive line.

To prevent the high defensive line from being exposed, the Matildas forwards and midfielders needed to deny the ball carrier time and space to play a pass in behind. When this didn’t occur, the defensive line still stayed high instead of dropping off to reduce the space in behind. This was evidence of the team defensive coordination still being a work-in-progress.

For example, we often saw midfielders failing to get tight to the ball carrier, leaving the Matildas back four exposed to a simple ball in behind. Notably, centreback Clare Polkinghorne’s hamstring injury against Italy came from having to repeatedly make recovery sprints from a high defensive line. 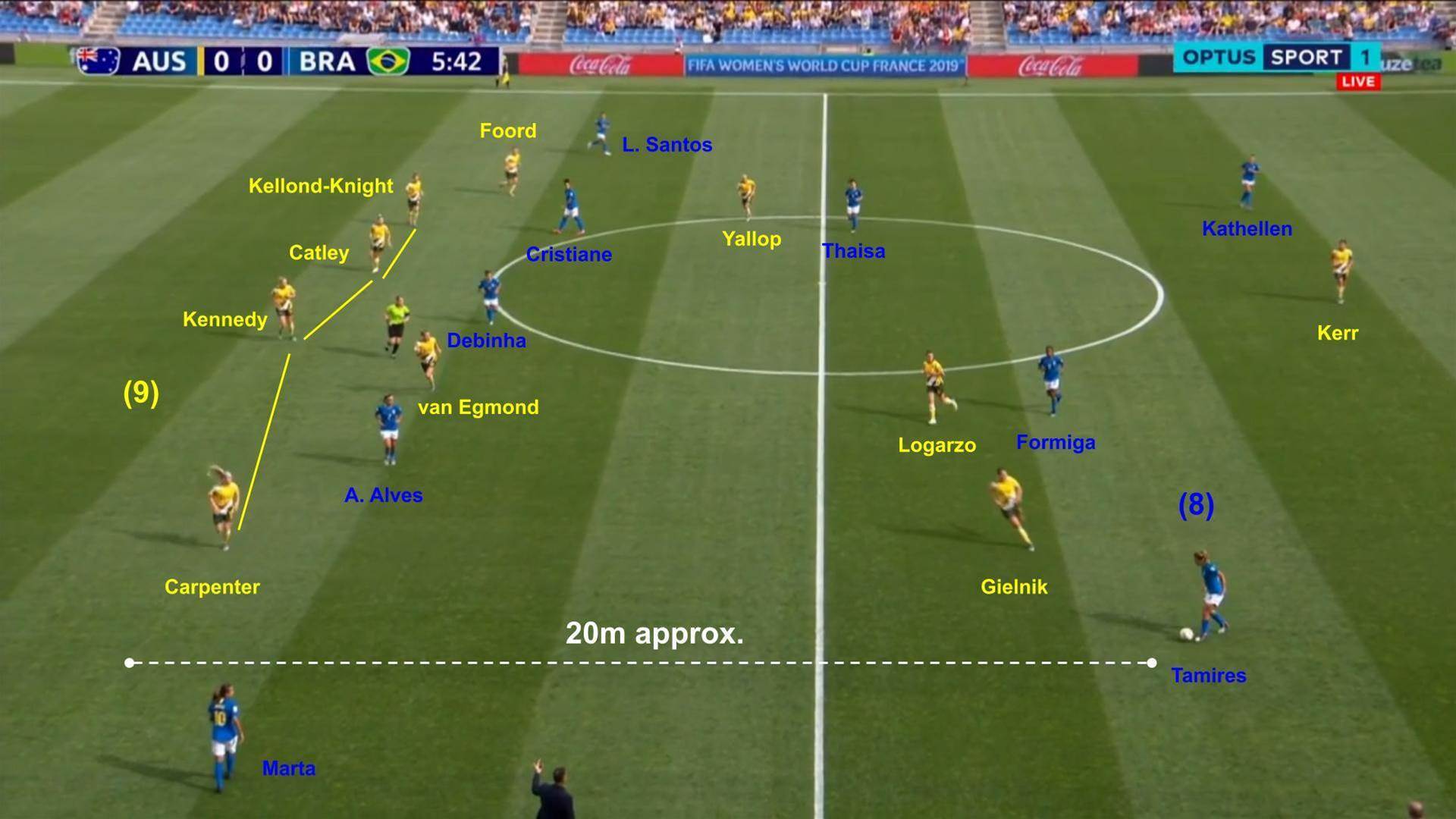 Sensibly, in later World Cup games the high defensive line was repositioned to be slightly deeper, with the Matildas forwards and midfielders reducing the proportion of their pressing in the attacking third. This table shows a downward trend in attacking third press attempts. 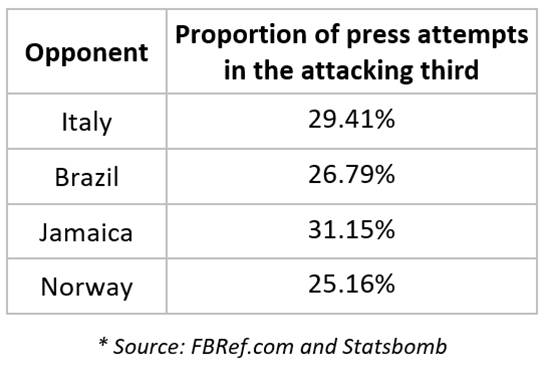 With more time to work with the team after the World Cup, Milicic was able to work more extensively on pressing cues and the team’s overall defensive coordination. This allowed the high press to be more successfully implemented, with fewer instances of the high defensive line being caught out by a ball in behind.

This picture from the post-World Cup friendlies against Chile demonstrates one such pressing cue in action; Emily Gielnik forces a predictable pass (8) which Amy Harrison is ready to intercept (9). 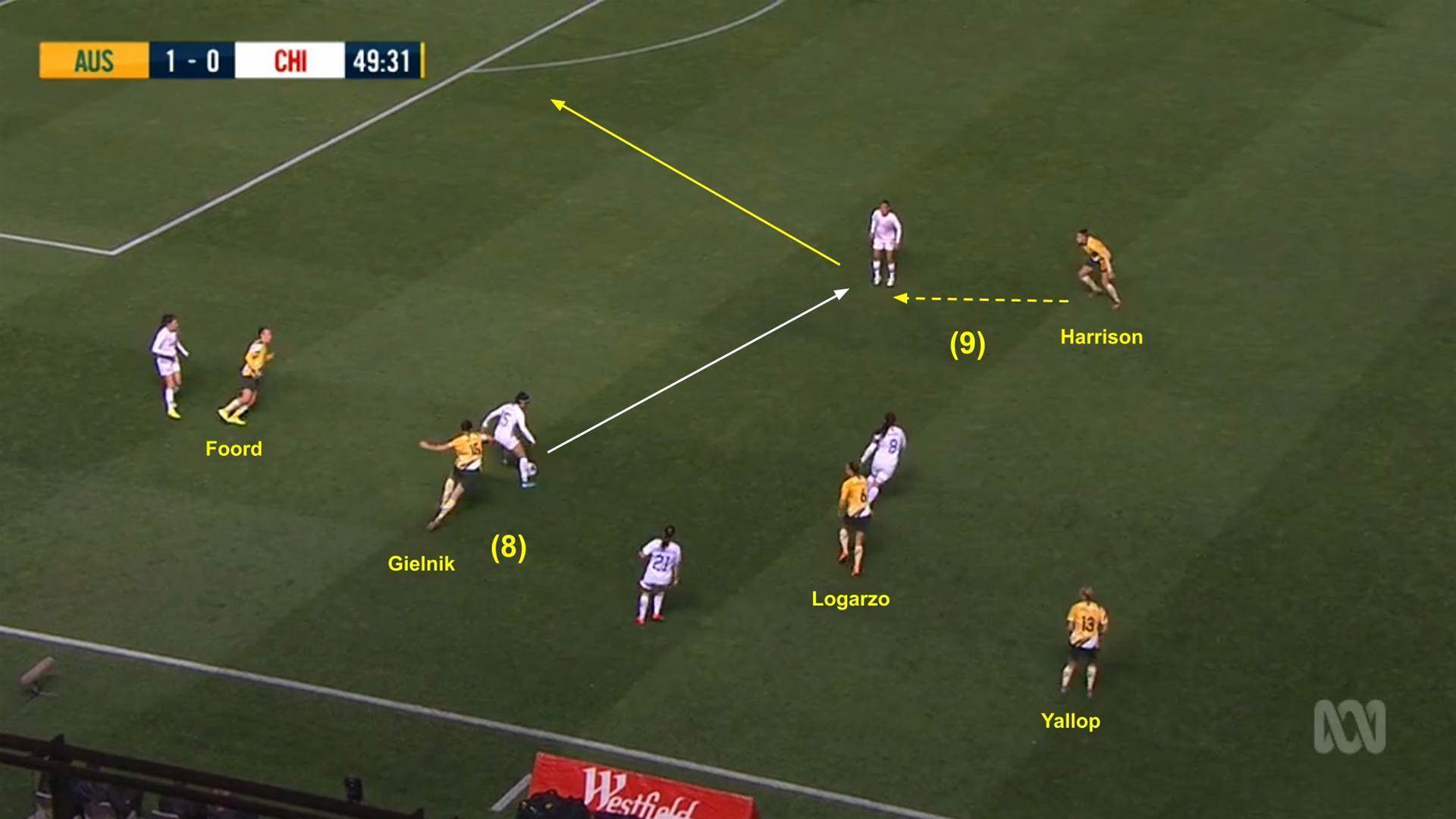 The high defensive line was also less likely to be caught out by a ball in behind, with Milicic experimenting with quicker defenders. At the World Cup, we saw centrebacks Alanna Kennedy and Clare Polkinghorne, who struggle against quick forwards.

Post-World Cup, we saw Jenna McCormick and Emma Checker being given opportunities at centreback. Both McCormick and Checker are extremely athletic, and this gave confidence to the rest of the team to press higher up the pitch, safe in the knowledge that the defenders could sprint back and deal with 1v1 battles.

The integration of McCormick and Checker, and that of Karly Roestbakken at fullback, adds depth to the Matildas’ defensive ranks and provides the new coach with interesting tactical options. In Part Three, we’ll look at how the Matildas squad might shape up for the 2021 Olympics, the 2022 Asian Cup, and the 2023 World Cup.

The author is an experienced football coach, with over 200 games at development and senior level. He has completed the FFA/AFC B Licence and can be reached via the Facebook page "Tacticology".