Matildas goalkeeper Mackenzie Arnold has said that Brisbane fans are the best in the W-League.

When the Matildas face Korea Republic on March 3 at Suncorp Stadium, it will mark the first time in almost five years the national side has played in Brisbane.

In April 2014, Australia played Brazil in two international friendly matches with one match open to the public while the second was invitation only.

"I think I was 19 or 20 back then so to have it here again and to be at Suncorp, is a great opportunity for us," Arnold said.

"It's really good of Brisbane to have us here, for a training camp as well and we're really thankful for that."

Fans in Brisbane have been eagerly waiting for the chance to watch their national team play in the state's capital and W-League active supporters group The Roar Corps (TRC) have been leading the charge.

The group, who were founded ahead of the 2017/18 W-League season, have been at the forefront of support for their home team Brisbane Roar and have gained widespread praise for their passion.

So when they heard the Matildas were coming to Brisbane they worked with Roar to engage Football Federation Australia (FFA) to get a Matildas active supporters section (332) for the game at Suncorp Stadium.

The 25-year-old Roar goalkeeper knows that she will see many familiar faces in the crowd come this weekend.

"They're the best fans in the league and by the end of the season we knew a couple by name, they were there that often, so it will be really cool to see them there," Arnold said.

It will be the last opportunity for fans to see the Matildas on home soil before the World Cup in June.

The opening match of the Cup of Nations will see the Matildas face Trans-Tasman rivals New Zealand on Thursday, February 28 at Leichhardt Oval. 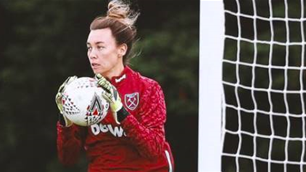 Arnold pushes for Matildas starter as trio debut in WSL