Australia in possession; Vietnam in defence

While other analyses have dealt with these two ideas separately, it is prudent to analyse the two in tangent, as Australia’s possession high up the field is determined by Vietnam’s defensive shape and position.

In possession, the Young Matildas formed a 3-5-2 formation, where Taylor Ray slot in between the two centre-backs, while Courtney Vine (RB) and Karly Roestbakken (LB) pushed up into the midfield and front three. Australia were afforded the space to do so as Vietnam sat in a 4-4-2 defensive shape, whereby the front two would block narrow passes into the middle, and press passes out wide to Australia’s RB and LB.

As with their game against Thailand, Australia’s RB and LB started high up the field. This may have once again obstructed the flow of Australia’s attack, as starting the girls high immediately engaged Vietnam’s wingers. One could argue Vine and Roestbakken were better off starting deeper, thus putting Vietnam’s wingers in two minds as to press, or afford the girls space. This was vindicated with Nevin’s goal, who received the ball relatively deeper than her midfielders, and had space to carry the ball forward and shoot.

Another tactic which Australia again adhered to tonight was Larissa Crummer’s long, diagonal balls to Princess Ibini. Vietnam created the conditions for a long ball, as their front two did not press Australia’s centre-backs. While I was critical of this tactic in my previous article, it seems Crummer’s long balls fooled Vietnam into thinking Australia were a one-trick pony, whereby the defenders were waiting for Crummer’s long balls. This allowed Ibini to surprise her markers and drop deep to receive the ball, often in space. Credit must go to coach Leah Blayney for devising this plan, as Ibini’s movements put Vietnam’s defenders in two minds, as centre-backs were forced to either: come out of the defensive line and mark Ibini, or pass her on to a midfielder, thus leaving Chidiac or Lowe free.

As with the previous game, Australia still seem vulnerable on the counter-attack, particularly down their wings. This is not due to personnel deficiencies — rather, it is a result of pushing players forward while in possession, thus leaving space behind in the wide channels. To Australia’s credit, they often secure the centre with Crummer, Ray and Nevin who outnumbered both Thailand’s and Vietnam’s lone strikers.

It is therefore obvious that Australia must be quicker in transition on two fronts. Firstly, they must prevent diagonal balls from being played into the channels. This responsibility rests on the front three, and or the closest midfielder/s to where possession was ceded. Secondly, Australia’s 2, 5, 7 and 11 (RB, LB, RW, LW) must either press the ball carrier, or recover into the defensive line as quickly as possible to prevent their defenders being exposed to one-on-one situations.

In spite of this, Australia’s defence against Vietnam had improved since their previous fixture. Cooney-Cross, Ibini and Condon offered pace up front, which was particularly utile in pressing Vietnam’s centre-backs. Collectively, Australia seemed more attuned to pressing triggers, as seen when Vietnam played backward or ‘risky’ passes.

Wednesday’s result reflected the way in which the game evolved. Vietnam were happy to cede possession, while Australia thrive on dictating proceedings.

Australia must overcome their slow ball movement, however, if they are to trouble Thailand on Friday. At times against Vietnam, Australia’s slow ball speed made their possession slow and predictable, and therefore ripe for interceptions and turnovers as a result of forcing the pass. Australia’s front three, along with the overlapping RB and LB, must vary their depth and timing of runs, or risk having five players in line with Thailand’s defensive line and marking themselves out of the game.

The Young Matildas must be wary of balls over the top, too. Two of Thailand’s goals came from this method, while another was from a through ball during the counter attack. These were a combination of two factors: Thailand’s counter-attack and Australia’s vulnerabilities in transition. Regardless, Australia must rectify this issue, or risk falling behind and exposing themselves on the counter in pursuit of an equaliser. 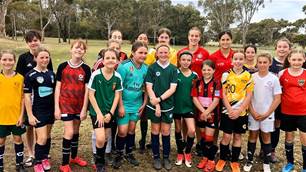 Why the W-League needs a TV show