Newcastle coach Ash Wilson has told her side there is no margin for error as they prepare to face struggling Canberra in the A-League Women.

The Jets host a Canberra side on Sunday who are winless from their opening six games this season.

Canberra's last game was a humbling 6-0 defeat at the hands of league leaders Sydney FC with rookie team Wellington the only side keeping them off bottom spot.

Wilson said the Jets, who returned from a three-week COVID-enforced break to draw 1-1 with Perth in their last game a fortnight ago, cannot go into their clash with Canberra thinking their opponents will rollover.

"The reality for Canberra is they have been in a lot of big games," she said.

"Even in their big loss to Sydney, it could have been 2-2 at the 60th minute mark.

"They create a lot of chances and their point tally is no reflection of their intensity which I believe they are going to bring.

"We need to be at our best, it is an important game for us.

"You continue to win games against the teams around you and below you stay connected to the top four. If we don't secure the three points then we are doing it to our detriment."

Wilson's side have games up their sleeves in the coming weeks owing to that COVID break which will prove handy in their bid to close the gap on the likes of Adelaide, Perth and Melbourne Victory.

But the Jets boss was wary of depending on other teams slipping up to determine whether they made the top four.

"We have talked about this game and the competition being in our hands," she said.

"Some of the teams around us are two games ahead of us. It starts with making sure we are winning every game and getting the maximum number of points.

"You don't want to be relying on other teams to seal your fate. For us it's about concentrating on us and doing everything we can to win." 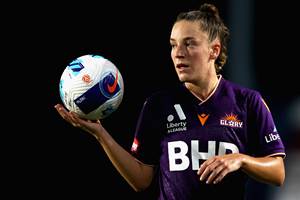