3. THE POSITIVES AND THE NEGATIVES

We've laboured these points across two tournaments now, so rather than bang-on about our tactics any longer, we thought we'd instead focus on a few key positives to take out of the AFC Championships.

Throughout this tournament we've witnessed this young team in a very difficult environment. They've had to play in unplayable conditions with everything on the line (and won). They've had to keep our heads up despite enduring humilating scorelines.

They've had to throw their bodies on the line to make last-ditch challenges, when the game is already decided. They've had to play different positions and tactical formations in games merely a few days apart from each other.

Our individual quality is also a real highlight. We've spoken about certain players throughout this tournament who have stood out, but woman-to-woman we can tell that our players are - and will become - very competitive on the world stage as they continue to develop.

We can takeaway from a very difficult tournament some cracking highlights. The quality of the few goals we've scored has been unbelievable. The tackling and bursting runs likewise. Some of the saves and blocks, even tonight, were top-class as well.

When we're playing with confidence, it's like a wave goes through this team and suddenly every player on that park is an inch taller and a second faster. Just remember that feeling.

More than anything, these women have had to handle multitudes of pressure at a very young age. Hopefully they can all form a sense of comradery from this.

Being young is all about learning. At least we can guarantee this is something that they'll learn from. 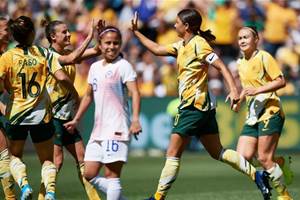 We all know Sam Kerr scores goals, but what did we learn from the Matildas 2-1 win over their familiar Chile opponents? Let's find out...
Previous Page
1 2 3 Single page