A Sky Blue prodigy was back with a vengeance as Sydney FC swept aside Melbourne Victory 3-0 in a cracking Big Blue W-League opener for both teams.

THE COMBINATION QUALITY IS SKY HIGH!

It's clear to see now how much Ante Juric's ability to re-sign the bulk of his squad early in the campaign and settle the team heading into this season is paying off.

After shaking off the inevitable cobwebs in the opening 10 minutes, Sydney played the best football we've seen so far this season.

Even Shadeene Evans' last minute goal was characteristic of the fluid team play we've come to expect from Juric's team.

You couldn't ask for more than the combinations Foord, Siemsen, Teresa Polias, Sofia Huerta and Chloe Logarzo (just to name drop) were offering by the 20th minute mark. It was sensational football at times, made all the more impressive by the fact they remained so defensively solid simultaneously.

.@WLeague | 4' GOALLLLLLLL!!! First real foray forward from the Sky Blues and @CaitlinFoord works the ball to @remyysiemsen in the box, she takes a touch around the defender and finishes low into the bottom corner! 1-0#SydneyIsSkyBlue #WeAreChampions #BigBlue pic.twitter.com/bGn9JyvVFg

From Victory's perspective, we caught a few glimpses of their own quality there. Dowie is certainly the benchmark for a physical hold-up striker when she gets her back to goal in the box...perhaps that's who Siemsen's been watching?

But they couldn't the match the Sky Blues because they simply don't have that level of talent depth throughout the team. It's a confidence game and Sydney are streaks above the rest of the pack in round one.

The question now becomes, how fast can everyone else catch up? 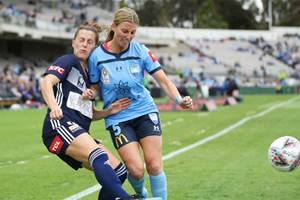 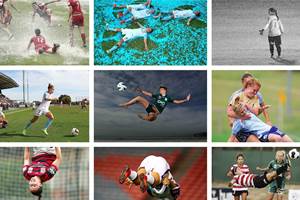 Play Like A Girl: The Greatest W-League Photos Of All Time

To mark the kick-off of the biggest W-League season yet, we've trawled through our archives to present the Greatest W-League Photos Of All Time. It's the latest in our series celebrating female football!
Previous Page
1 2 3 Single page

Confidence players prove the W-League is definitely not decided yet