2. IT'S ALL ABOUT THE CUTTING EDGE

What we're lacking, and you can always tell in friendlies like these, is cutting edge. Now, you might think that expecting a bunch of top-class internationals, most of whom are coming off long NWSL seasons, to put in 120% when they can fairly easily walk over Chile is too much.

The way you ensure that these players retain that key competitive edge, that allows us to fully judge our potential and make hard decisions about our best starting eleven, is by ensuring that we have greater competition for each starting place.

The current Matildas starting eleven is at least 90% assured of their place. Lydia Williams - who was fantastic today but has barely played a match this year - is a perfect example.

It stems from every position. This team have played together for a long time now and yes, it is hard to argue that natural telepathy isn't a fantastic asset for our squad when Caitlin Foord and Sam Kerr are combining like siamese twins.

But having a young player breathing down your neck, ready to take your spot at any opportunity is a far greater asset going forward. For both the team and Australian football.

McCormick's debut shouldn't overshadow the fact that there are very few new faces in this team and apparently the ones we do find don't come from our youth systems at all.

It's telling that Amy Harrison and McCormick were two of the most dynamic players on the pitch today. Yes, we have an element of strength in depth.

But Luik isn't exactly a spring chicken pressing to take Elise Kellond-Knight's place, neither is Lisa De Vanna really on the cusp of throwing out Hayley Raso. So that depth, especially over the next World Cup cycle, maybe isn't worth as much as we think.

And there's a solution to this... 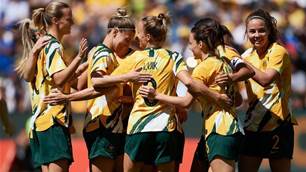