A double from 17-year-old midfielder Sarah Hunter in just her third W-League game, has earned the Western Sydney Wanderers a hard earned point against Adelaide United in a pulsating encounter at Marconi Stadium today.

A 2-2 draw probably didn't do the Wander Women justice though after they had 16 shots to Adelaide's 12. Neither team was able to hit the target too often with the Wanderer's having five shots on target, while Adelaide only had three.

Sarah Willacy's last gap save to deny Maria Jose Rojas completed what was a hard fought contest with both sides showing plenty of fighting spirit.

It was the teenager from Pymble Ladies College though who stole the headlines, with Hunter being superb throughout, getting heavily involved in the middle of the park in both attack and defence.

She touched the ball 56 times, with five shots at goal and two crosses to go along with 25 passes. Her passing accuracy was 76%, linking up well with Leena Khamis, Georgia Yeoman-Dale and Danika Matos.

When Hunter wasn’t putting herself in dangerous positions in the front third, she was tracking back to win the ball from the opposition. She had six tackles, won six duels and had two interceptions to complete a fantastic all-round performance. 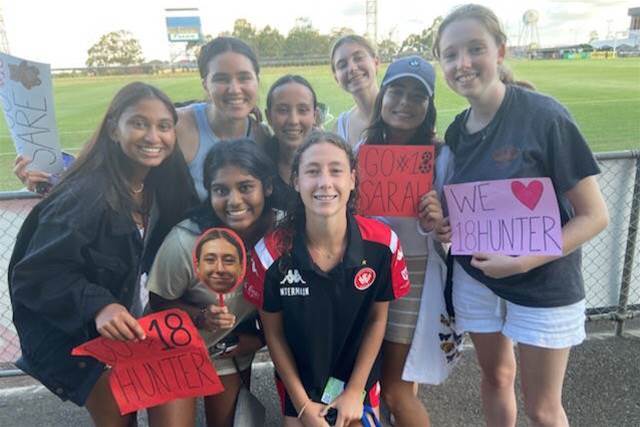 Sarah Hunter with her fan club after a heroic double for the Western Sydney Wanderers today.

Hunter was humble at full-time, preferring to pay tribute to the coaching staff and her team-mates.

“To be honest the coaches have been amazing, the best coaches I have ever had. And the girls too have been great to work with and the point today was a reflection of the hard work we have put in.”

The Wanderers came from behind twice. In the first half, Chelsie Dawber had given the Reds the lead in the 33rd minute, after a superb pass from Mallory Weber.

Just when the visitors looked like taking the lead into half-time, some neat work from Yeoman-Dale saw Hunter unleash a clever left foot shot into the bottom right hand corner of the net. She admits it’s a combination they have worked hard on at training.

“We have been working on our combinations with Leena (Khamis) dropping in and us working off her. Georgia has been fantastic on the wing and provides pace, and Danika is great at crossing the ball in from the right.”

The first half goal lifted the Wander Women who came out breathing fire in the second period.

However, against the run of play Dylan Holmes gave Adelaide the lead again in the 71st minute. But to there immense credit, the Wanderers didn’t give in with Matos and substitute Teigan Collister working hard in the midfield with Hunter. It was Collister’s blistering speed that set up Hunter’s second.

She chased what looked like a lost ball on the right wing, outpacing her Adelaide opponent before sending a teasing cross into the box where Hunter got enough power behind the shot to go through Sian Fryer-Mclaren in the Adelaide goals.

The Wander Women pushed hard for the win but it wasn’t to be and Willacy’s last second heroics ensured both teams got a point.

While the draw kept their finals hopes alive, Hunter insisted her team will take it game by game.

“We’ve played some top sides this season, so the second half of the season is about putting our best foot forward and gathering wins and points.” 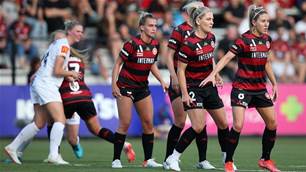