The first-ever standalone National Rugby League Women’s game in Australia was a great day out at the footy, but not as we’ve come to know it.

Amidst the excitement of the Canberra Raiders’ return to rugby league’s biggest game (I didn’t call it a dance …) and the almost compulsory reflections back to 1994, when the Green Machine last qualified for a grand final, it can get you pondering just how much a day at the footy has changed over the past 25 years.

The progression of the game, especially over the past five seasons, has been remarkable, with the introduction of Bunkers and season kick-offs in Perth and Suncorp Stadium Magic Rounds and the like. As a result, it has become harder for even the most rusted on, tired and cynical so-called supporter to claim “meh, we’ve seen all of this before”. In 2019, whatever rugby league event you’ve rocked up to, chances are you haven’t seen anything like it – ever.

The standalone NRLW game played at Leichhardt Oval on Sunday afternoon was another great example. For starters, the match kicked-off at 1.15pm, removing instantly the chances of the stadium being drowned in beer. Not that I was even looking for it, but I don’t actually think booze was being sold … If it was, fair enough …

Sitting at a café brunching on the other side of the city, you buy and download your $10 tickets in the hours before the match, which can then be sent to your mates via text. No need to line up the night before with a knapsack full of rations and a sleeping bag to secure your spot in 2019 …

Get there early enough and you can jag a parking spot in a nearby street. As soon as you walk in to Leichhardt Oval for the NRLW on Sunday, you were presented with the opportunity to have a photo taken with the NRLW premiership trophy. This amazing silver sculpture looks like something that aliens play for in outer space, but which they lost, and now planet Earth has it. It’s a majestic, space-age looking thing. The most awesome trophy in footy.

Once again, just like for the Origins at North Sydney Oval, the young female fans were there in numbers, screaming on from the hills and the stands in support of their heroes – the Kezie Apps and the like. But there were plenty of footy-loving blokes milling about, too. Many of them were pretty transparent: hmmm, honey, I think little Jessica and I need to be spending more time together. I have an idea. Jessica needs sporting role models … BYE! There were male fans in Dragons jerseys and some in Roosters’ get-up. After two short seasons, the respect for this new women’s comp is growing.

The chairman of the Australian Rugby League Commission was watching from the hill, taking the match in properly. There is buy-in from everyone as far as women’s rugby league is concerned, but it won’t be rushed. It can’t be. Nor does it have to be. There were 2293 paying fans at Leichhardt on Sunday. A great starting point. 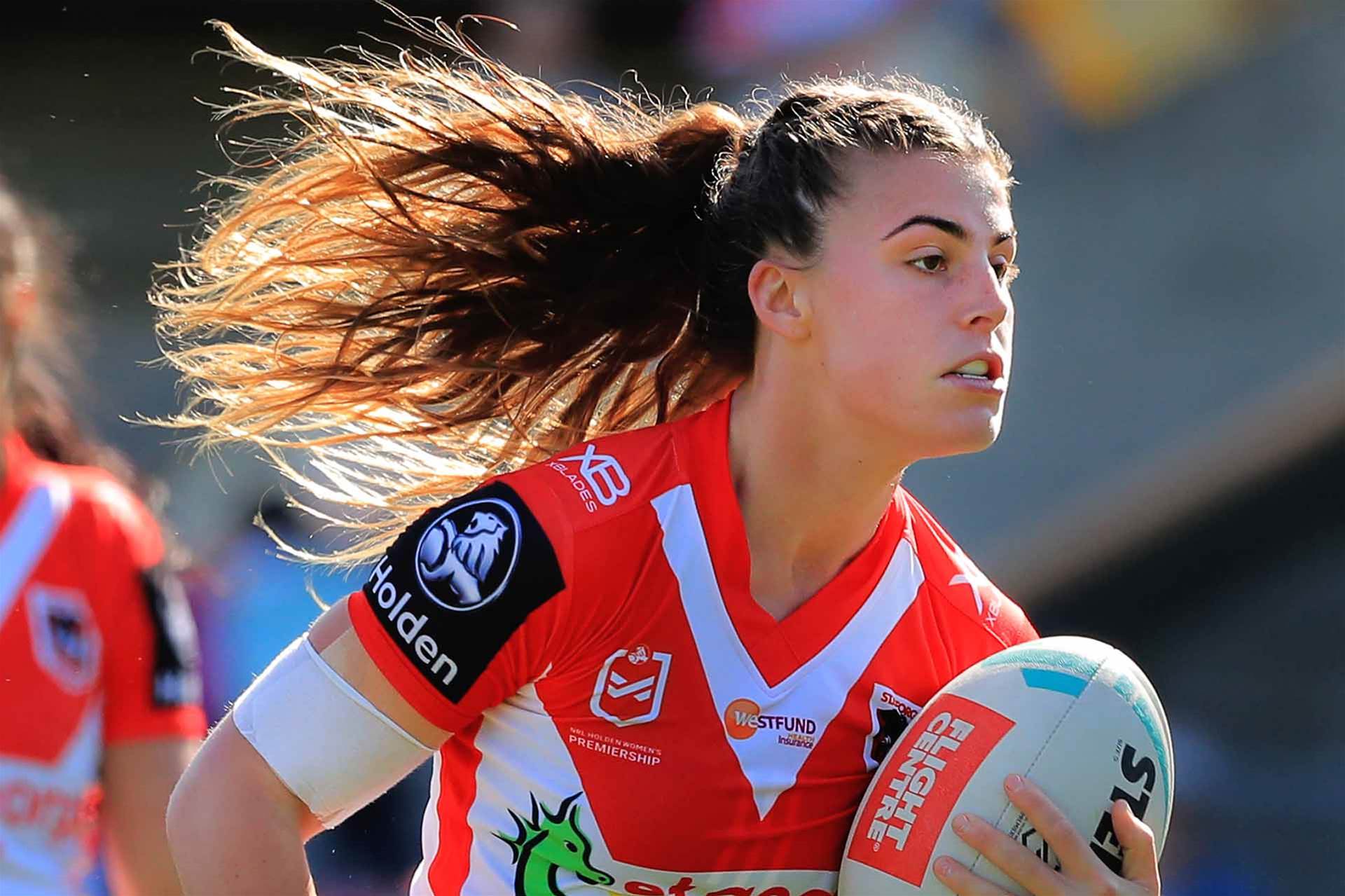 The Dragons' Jess Sergis on the charge. (Photo by Getty Images)

For some big Wests Tigers home game nights, you can smell the beer from down the street as you approach the turnstiles. Here, in NRLW land, the DJ is filling the air with funky beats pumping out of speakers so hefty, they boast their own wheels. It’s late September, Sunday-chilled.

A niece and I found a spot in the concourse on the right-hand tryline - if your team is on the attack facing the Mary Street end. Footy sounds up this close are amazing. There’s a lot of chatter happening out in the middle that not even the TV mics pick up. Athletes under exhaustion, swears of frustration, woots of jubilation.

With the Sydney Roosters’ for and against just too much in the negative for them to concern themselves with dreams of joining the Broncos in the big dan … the grand final), Australian Jillaroos legend Ruan Sims was at her barnstorming best in her last game at an elite level. Her rampaging try under the sticks attracted a terrific roar from everyone at the ground, whoever you were supporting.

Here’s hoping the NRL persists with this standalone elite women’s rugby league match idea. It’s not the footy we’ve grown up with, but it’s still pretty cool, and certainly carries a point of difference – footy, family, fun, all wrapped up with a fair chunk of the afternoon left to spare.

Whether it’s better than a day out watching the men’s stuff is up to you to decide. One this is certain – it’s certainly the future of a day out at the footy. 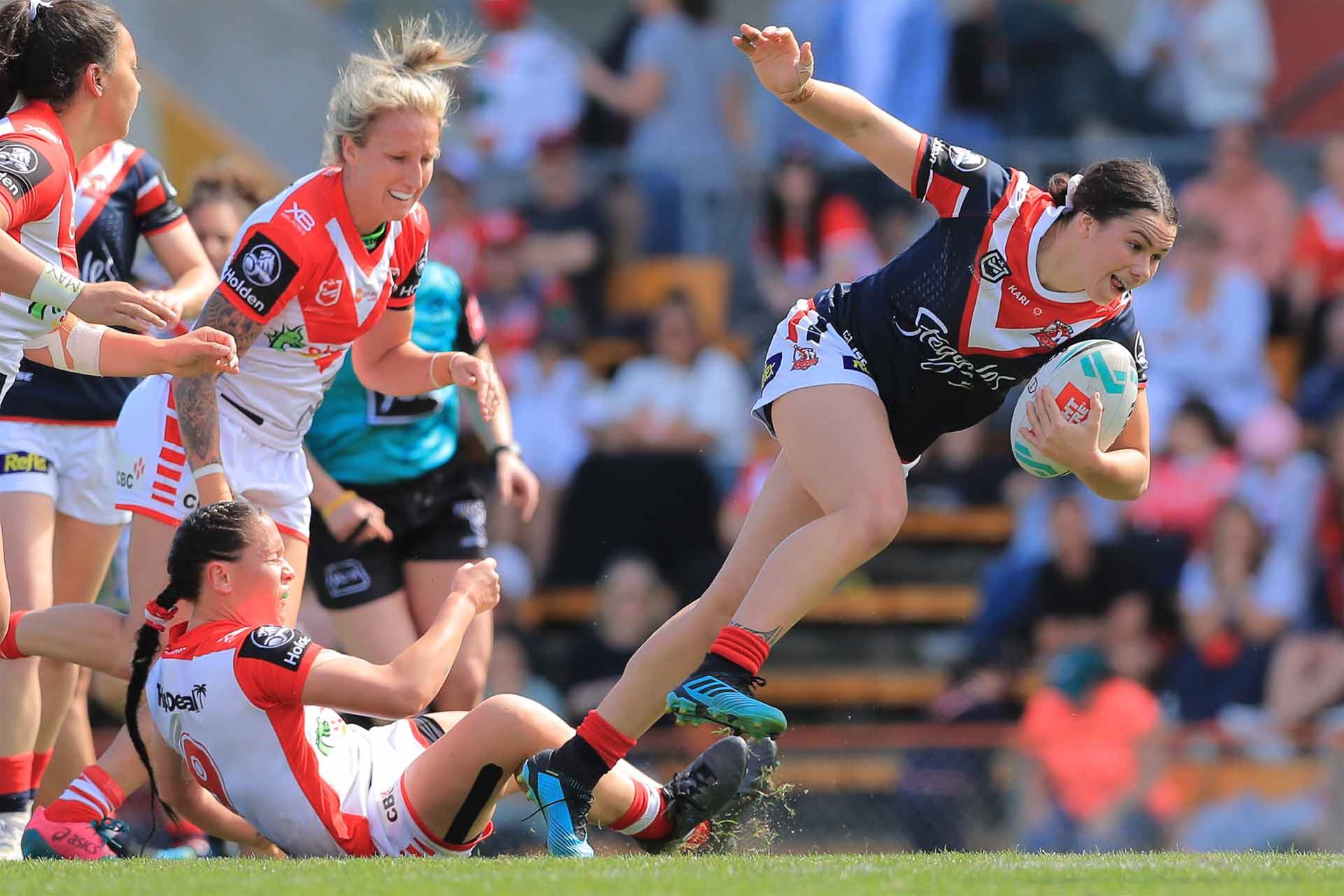