It is the second day of competition across the Gold Coast, Brisbane and Townsville today. The Women's Game is bringing the action across nine sports today.

Australia has won bronze in the Women's Team Final behind Canada (gold) and England (silver).

The Opals have opened their Commonwealth Games with a 113-53 win over Mozambique.

Next up in Canada on Sunday evening.

Australia's pairing of Taliqua Clancy and Mariafe Artacho Del Solar have claimed a win over Cyprus this afternoon.

🇦🇺 @MariafeADS & 🇦🇺 @TaliquaClancy get the win over 🇨🇾 Cyprus.

Stephanie Morton, who just last night won gold in the Women's Team Sprint where she set a Games Record, has set another Games Record this morning Women's Sprint.

It wasn't the only Games Record broken at the Velodrome this morning as the Women's 3000m Individual Pursuit was broken twice by the Australians.

Annette Edmondson was the first Aussie of the event and broke the record with a time of 3:27.255 but six competitors later teammate Rebecca Wiasak came out to beat it by 1.3 seconds.

But hold the horses, Scotland's Katie Archibald has come out in as the last competitor alongside Australian Ashlee Ankudinoff to take the Games Record from Wiasak.

Waisk and Archibald are into the gold medal final while Ankudinoff and Edmondson will battle it out for the bronze tonight.

7:36pm - Edmondson has taken the bronze medal in the Women's 3000m Individual Pursuit.

8:38pm - Wiasak has a silver medal with Archibald taking the gold.

9:33pm - Morton has won her second gold in two days after beating Kiwi Natasha Hansen in the Women's Sprint. Australia also picked up a bronze as McCulloch beat out Lauriane Genest.

Karen Murphy continued her winning ways into day two with a 21-3 victory over Zambia's Getrude Siame before a 21-16 lead over Colleen Piketh from South Africa.

She is through to the quarterfinal.

The Women's Fours have defeated the Cook Islands 15-9 and they will be back on the lawn shortly to face Namibia.

The Diamonds have won their second match 79-24 against Barbados.

Words from @CoachLisaA: "Let's keep a lid on it. It's another step along the journey. Very well done, there was a little but of mucking around at the end but enjoy the win, you did well, you worked hard and you did some really nice stuff." #GoDiamonds #GC2018 #GreaterTogether

Australian teammates Donna Urquhart and Christine Nunn battled it out until the last moment of the match with Urquhart moving into the quarterfinals of the women's singles with s 3-2 victory.

All over and it's 🇦🇺 @Donnasquash who triumphs 3-2 over @Christine_Nunn1.

Look at the respect between the two 🇦🇺 Aussie competitors 🙌#GC2018 #ShareTheDream pic.twitter.com/NYJv1A1wRK

Tamika Saxby is out the Women's Singles after a 3-0 loss to Joshna Chinappa from India in the Round of 16.

It's been a big morning of swimming for the Australians

Bohl and Hansen had the fastest time of the Australians with a both finding the wall at 30.92 seconds.

There will also be three Aussies in the Women's S9 100m Backstroke as Madeleine Scott, Ellie Cole and Ashleigh McConnell all posting times to decide which lane they will swim from in the Final.

In the Women's 50m Freestyle Semifinals will feature three of the 4x100m Freestyle relay team which broke the World Record and took home gold last night.

Cate Campbell posted the fastest time only 0.28 seconds off Games Record pace and she will go head to head with sister Bronte Campbell today.

Shayna Jack is the sole Australian in the other semifinal and will swim from lane four after posting a 24.50 in the heats.

16-year-old Kaylee McKeown will race in the Women's 100m Backstroke Semifinal alongside teammate Hayley Baker while Emily Seebohm is the only Aussie in the other semi posting the second fastest time of the heats.

Canadian Kylie Masse will provide competition for the reigning Glasgow gold medalist if the two make the final for tomorrow night.

Pickett took the bronze medal in a tight 50m breaststroke final while Hansen finished in fifth with Bohl in sixth.

In the women's 50m freestyle semifinal all three Aussie's qualified for the final tomorrow night while Cate Campbell set a new Games Record.

Bronte Campbell was was just behind her while Tayla Jack won her semifinal.

It started pouring down rain right before the women's 100m breaststroke semifinal, not the best conditions for this event but nonetheless, Emily Seebohm will be in the final tomorrow night alongside teammate McKeown and Baker.

Masse broke her own Games Record she set this morning.

To finish the night off, Australia went 1-2-3 in the final of the women's 100m Butterfly with McKeon winning the gold, Groves taking the silver and Trossell taking the bronze.

Australia had a 3-1 over Wales in the quarterfinals this afternoon.

Wales took the first game of the match but from their Australia dominated and now will face Singapore tomorrow morning.

Tegan Napper has finished the Women's 53kg in eighth.

Speaking to the media after the event she said it wasn't the best day for her.

"Everyone is here to support me, but still had a great time," she said.

"It was a good experience."

Now 31, Napper is looking to finish up her career for now to start a family.

"That's not really how I want to finish it, so I think maybe I'll keep going after that."

India's Chanu Mirabai took out the gold in the weight division.

The 23 year-old claims 🇮🇳 India's first gold of #GC2018 with a dominating performance in the women's 48kg weightlifting division.

Tia-Clair Toomey has made a snatch of 87kg and a clean & jerk of 114kg which sees her win the gold in the women's 58kg division. 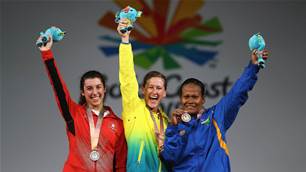 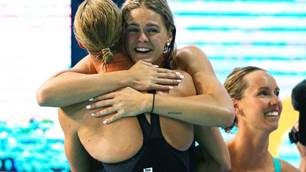 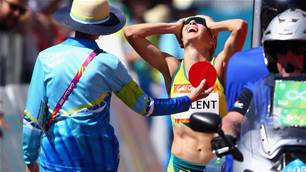